Your Browser is Outdated!
To experience this and other websites the way they're meant to be experienced, we recommend you update your browser.
Learn More and Update Your Browser
X
Login

High-level definitions and other ICMA publications

ICMA has produced a series of reports, briefings and white papers on various topical issues, highlighting their relation to, and impact on, the European repo market. These are available below. 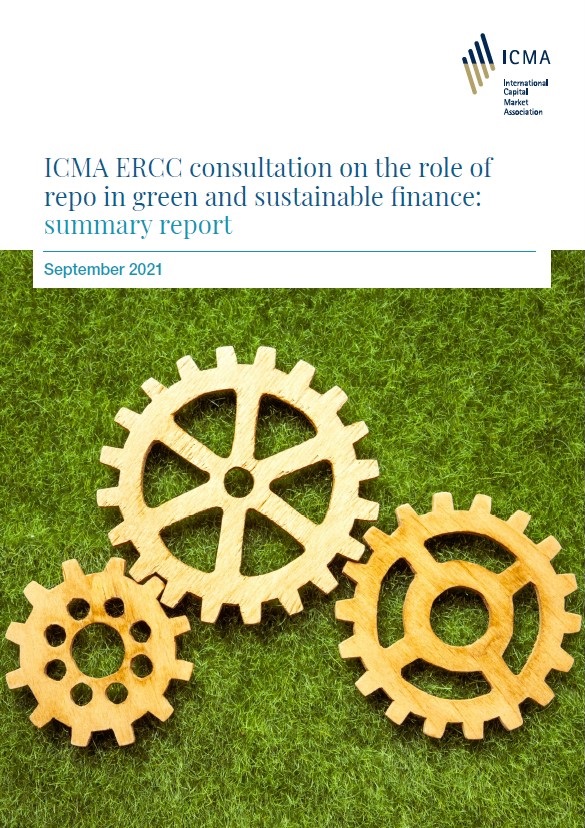 ICMA ERCC consultation on the role of repo in green and sustainable finance: summary report

ICMA’s European Repo and Collateral Council (ERCC) has published a summary report on the role of repo in green finance, following its consultation to reflect feedback received in response to a market consultation on the role of repo in sustainable finance which took place earlier this year. The consultation paper, issued in April 2021, was intended to serve as a starting point for promoting a broader discussion in the repo community on sustainability, as well as to explore the existing opportunities and potential risks in this area.

The report published today summarises the consultation feedback, highlighting the key themes raised in the 20 responses that have been submitted. Building on the consultation results, ICMA is considering with the ERCC next steps regarding potential guidance on repo and sustainability in close coordination with the Executive Committee of the Green & Social Bond Principles.

Green and sustainable finance: What is the role of the repo market?

The paper was published alongside a list of consultation questions and is intended to serve as a starting point for promoting a broader discussion in the repo community on sustainability. It reflects the complexity of the topic and the variety of views.

The results of the consultation will help the ICMA ERCC to identify areas of focus going forward and help to frame future workstreams, if required.


The European repo market at 2020 year-end

The ICMA European repo and Collateral Council (ERCC) has published a report on the performance of the European repo market at year-end 2020, focused on the euro, sterling, US dollar and Japanese yen markets and based on market data and accounts provided by market participants (both sell-side and buy-side). This is the 5th in the series of annual reports, which began with an analysis of the unprecedented dislocations in the euro denominated repo market at the end of 2016.

After the past three relatively uneventful year-ends, concerns about potential year-end dislocations began to build as early as October 2020, following the largely unexpected drop in rates at the September quarter-end. Market participants were wary of a potential collateral squeeze, citing significant excess reserves (which had increased from €1.7 trillion at the end of 2019 to €3.2 trillion by the end of October 2020) and a reduced supply of collateral (euro sovereign issuance less central bank purchases had taken €300 billion of collateral out of the market during 2020). A longer than usual (four-day) turn compounded any unease.

In fact, the  general view is that the turn was relatively subdued, with the buy-side looking to execute as much of their funding requirements as early as possible, while the banks went into year-end with more balance sheet than usual to play with. A common concern, however, relates more to conditions over the next twelve months, particularly in the case of the EUR market, given the widening of the PEPP envelope and the prospect of an even smaller EGB collateral pool; more so than the perennial uncertainty related to banks’ balance sheets and dealer capacity. A further consideration for the immediate future is the impact of Brexit on repo market liquidity, as well as for euro denominated derivatives, particularly in light of the migration of the euro equity markets from the UK to the Eurozone on 4 January 2021. The end of the pension fund industry’s exemption for mandatory clearing could also increase demand for euro collateral transformation, an issue currently under discussion with the relevant authorities.

The ICMA ERCC will continue to monitor closely market developments, highlighting potential risks and dislocations to the smooth and orderly function of the market. In doing so, it will remain in close contact with the relevant authorities and regulatory bodies. 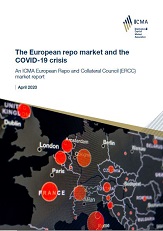 The European repo market and the COVID-19 crisis

This short report reflects on the European repo market during the initial phase of the COVID-19 market turbulence that began in late February and ran until early April. The report looks at market performance over that time, as well as market accessibility, collateral management challenges, settlement efficiency, and the implications for haircuts and collateral maintenance. While primarily focused on the euro sovereign segment of the market, it also reports on the performance of the sterling and USD markets.

The feedback from market participants is that the European repo market, for the most part, has ‘held up well’ during the market turbulence, that peaked in late February/early March. However, this has not been without some strains. In particular, as the demand for repo increased, banks’ capacity to intermediate remained constrained. Meanwhile, the market has had to deal with the disruption of operating remotely, with implications for both the supply of collateral and operational efficiency. 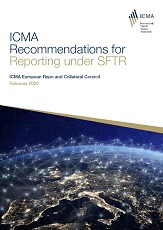 ICMA Recommendations for Reporting under SFTR

The ERCC has published on 24 February 2020 its guide to reporting under the EU Securities Financing Transactions Regulation (SFTR). The ICMA guide aims to help members interpret the regulatory reporting framework specified by ESMA and sets out complementary best practice recommendations to provide additional clarity and address ambiguities in the official guidance. It is supplemented by a suite of sample reports and an overview of repo life-cycle event reporting, which have both been published today. The documents evolved over the past couple of years as a product of discussions within the ERCC’s SFTR Task Force, benefitting from substantial input provided by members.
These are not static documents and will continue to evolve as we move closer to the reporting go-live date in April and beyond. Please make sure to download the latest version from our SFTR webpage when consulting the guide.


The European repo market at 2019 year-end

This report focuses on the euro, sterling, and USD markets, and given the significant attention on the USD repo market since September 2019 and in the build-up to year-end, this is the starting point for the 2019 review. The analysis is based on market data and accounts provided by market participants (both sell-side and buy-side).

This is the fourth in the series of annual reports which began with an analysis of the stresses and dislocations witnessed in the euro denominated market at 2016 year-end, which were unprecedented, and caught market participants and authorities off guard. In many respects, the extremities of 2016 were the culmination of a perfect storm of factors, including market positioning, dislocations in the EUR/USD FX basis, an excess of euro cash in the banking system, and a reduction in the intermediation capacity of dealers due to regulatory reporting requirements.

While subsequent year-ends have not been as stretched, they have nonetheless continued to raise concerns among both liquidity providers and market users. What the 2017 and 2018 year-end reports reveal is a change in behaviour, both on the sell-side and buy-side. In the case of dealers, we observe more balance sheet being put to use over the turn (particularly by the non-GSIB community), while asset managers have stepped up preparedness, locking in financing needs early, negotiating balance sheet allocation from their dealers well in advance, or turning to alternative money market instruments to manage their liquidity. This has not, however, prevented significant price moves in both general collateral and specific issues.

In brief, compared to previous year-ends, 2019 was relatively uneventful. As one market participant commented, it was possibly the most subdued year-end of the decade. But the reasons for this are in themselves worthy of analysis and further discussion.


The European repo market at 2018 year-end

This report documents and analyses repo market behaviour through 2018 year-end.

The repo market at 2018 year-end was more subdued than anticipated. Core Euro GC and specials did come at a premium leading up to the turn but then cheapened significantly into year-end itself. Meanwhile, non-core GC saw scarcely an impact, with only some specials becoming difficult to find. The short-date Gilt repo market tightened slightly, however term spreads widened notably, seemingly caused by the introduction of UK bank ring-fencing. The US treasury repo market, however, was the real surprise, with an unexpected scramble for cash sending rates notably higher.

While the markets, for the most part, were fairly orderly, it is clear that a number of year-end pressures and risks persist. Banks still face pressures to reduce balance sheet, and so their intermediation capacity, in order to comply with a number of entity or jurisdictional specific reporting obligations, including Basel ratios (primarily Leverage Ratio), national bank levies, and the G-SIB capital surcharge. Positioning is also an exacerbating factor, both in terms of bonds/collateral and FX – which is highlighted by the spike in USD rates.

However, since 2016 it would seem as if the market has become more aware of these risks and better prepared in terms of managing its year-end financing and collateral requirements. Locking-in funding early, however, comes at a premium. But, while the extreme levels and dislocations of the 2016 turn have not been repeated since, there is still plenty of quantitative and qualitative evidence to suggest that year-end pressures persist, and that access to repo and lending markets for many firms is impaired. 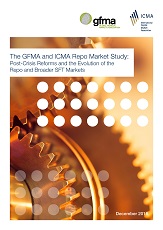 The GFMA and ICMA Repo Market Study: Post-Crisis Reforms and the Evolution of the Repo and Broader SFT Markets

The GFMA and ICMA have jointly published a report, The GFMA and ICMA Repo Market Study: Post-Crisis Reforms and the Evolution of the Repo and Broader SFT Markets, which was prepared with the support of member firms – in particular including 33 survey respondents from repo and collateral desks across Asia, Europe and North America; and 14 member firms providing quantitative impact analysis on SFT minimum haircuts.

The purpose of the report  is to provide an analysis and evaluation of the post-crisis assessment of the vulnerabilities in SFT markets, the subsequent regulatory reforms and how these have influenced the way in which SFT markets function.  It also highlights practitioners’ views on potential future developments and vulnerabilities.  The goal is for this report to provide a comprehensive and fact-based analysis to assist policymakers’ discussions on ways to further assess the coherence and calibration of the post-crisis reforms with regards to their impact on repo and broader SFT markets, which enable the functioning of the global capital markets as well as the broader financial system.


The European repo market at 2017 year-end

The 2016 year-end provided an extreme benchmark by which future year-ends will be assessed, and, in relative terms, the 2017 year-end was mostly orderly. However, balance sheet pressures over the ‘turn’ persisted, and core GC tightened significantly (more than 350bp in the case of German collateral), as did specials (by as much as 600 to 700bp in the case of some French government bonds). Meanwhile, compared to 2016, periphery sovereign markets traded relatively tighter, as did Gilt repo.

This short report uses market data and interviews with market participants (sell-side and buy-side) to provide a brief analysis of the 2017 turn, and the underlying factors that made it expensive and difficult, but not as extreme and disorderly as the previous year.

Closed for business: a post-mortem of the European repo market break-down over the 2016 year-end


Perspectives from the eye of the storm: The current state and future evolution of the European repo market


CSDR Mandatory Buy-ins and the treatment of SFTs